A blog powered by Jekyll and based on the Poole/Lanyon theme.

Denver, Colorado is considered to be one of the most bikeable cities in America. In addition to the fine bike lanes, bike trails, and mostly favorable weather (300 days of sunshine, says the possibly dubious but sunny claim), Denver is also a B-cycle city, with bicycle rental kiosks dotting the sidewalks near the city center. For this short study, I obtained Denver’s 2014 B-cycle trip data, and used it along with some other data sources to see if I could model hourly ridership across the Denver B-cycle network. My study indicated that most calendar and clock variables are highly significant when predicting ridership, and weather variables such as temperature and amount of cloud cover appear to be as well. This post details how I obtained the data, how I merged data from different sources, shows some explorations of the data, and finally shows how I created a regression model of system ridership.

B-cycle is a public bicycle sharing company that operates in several cites, including Denver, Colorado. The premise is that users may “checkout” a bike from a kiosk, which is usually along a city sidewalk, under various short- to long-term access passes, depending on the user’s preference and anticipated usage. In Denver, most of the kiosks appear to have 10-20 “docks” where the bikes are stored until a user checks out the bike. After a user checks out a bike, they ride it for as long as they wish, and then check it back in any B-cycle kiosk. In 2014, Denver B-cycle operated 84 different kiosks, which are mostly clustered around the city center. At the end of the year, B-cycle posts their yearly trip data as an Excel spreadsheet on their company webpage. I used these data, along with data from a few other sources, to conduct this study. For more information, please see the Denver B-cycle homepage.

For this report, I obtained data from several sources and combined the data together, taking the following steps. Most of the initial data download and munging steps can be replicated by looking at the exploring_bcycle_data.Rmd file; most of these steps were too time-intensive to be carried out in a production-level script.

A Note about Holidays

For my study, I factored in City of Denver observed holidays. Denver city celebrates all the same holidays as the federal holidays, with the following exception: Columbus Day is not a city holiday, and is replaced by Cesar Chavez Day, usually in late March. I only factored in the major federal holidays that result in government and bank closures (with the exception above), and not the lesser holidays.

However, over 1% of the rides (4279 rides) have the same checkout station as return station with a trip duration of only 1 minute (see Figure 1 below). I believe these should be filtered out because I believe the majority of these “rides” are likely people checking out a bike, and then deciding after a very short time that this particular bike doesn’t work for them. I believe that most of the same-kiosk rides under 5 minutes or so likely shouldn’t count, but only culled the ones that were one minute long. 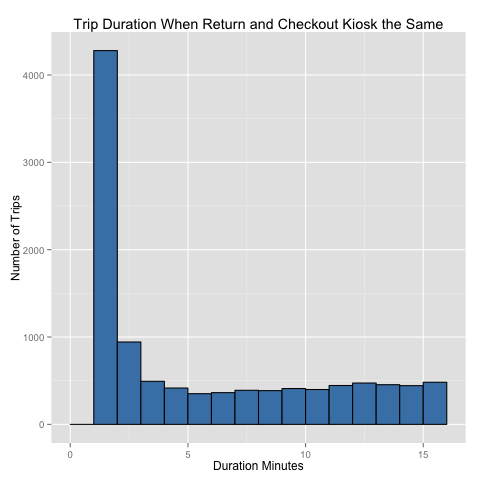 Figure 1: Trip Duration when Checkout Kiosk and Return Kiosk are the same

I also filtered out 258 rides with an “invalid return” station. This could be any number of things, but since finding nominal distance for these rides is very difficult, I filtered these out as well.

As mentioned in bullet #3 in the Data Acquisition section, I used a Google Maps API in the ggmap package to derive the between-station distance for each station pair and then for each ride. Because a large number of rides were returning to the same kiosk, meaning the minimum distance ridden cannot be estimated by Google Maps, I estimated the distance ridden by calculating the average speed of all the other rides (nominal distance ridden divided by the duration), and then applying this average speed to the same-kiosk trip durations, capping the trips at an arbitrary 5 miles. While it’s likely I am underestimating the total distance ridden by a fair amount (perhaps 25%), since many riders will not take the straight-line distance between two stations (especially tourists/non-commuters), I estimate riders rode at least 616,960 miles on B-cycle in 2014, with a more likely number 25% higher at 771,200 miles.

The following ten kiosks are the most popular kiosks by number of total bike checkouts in 2014. The return kiosk popularity is very similar.

The following ten kiosks are the least popular kiosks by number of total bike checkouts in 2014.

I used the ggmap package to create the following map showing the popularity of the various checkout kiosks (Figure 2). The size of the circle is proportional to the number of checkouts from that kiosk in 2014. 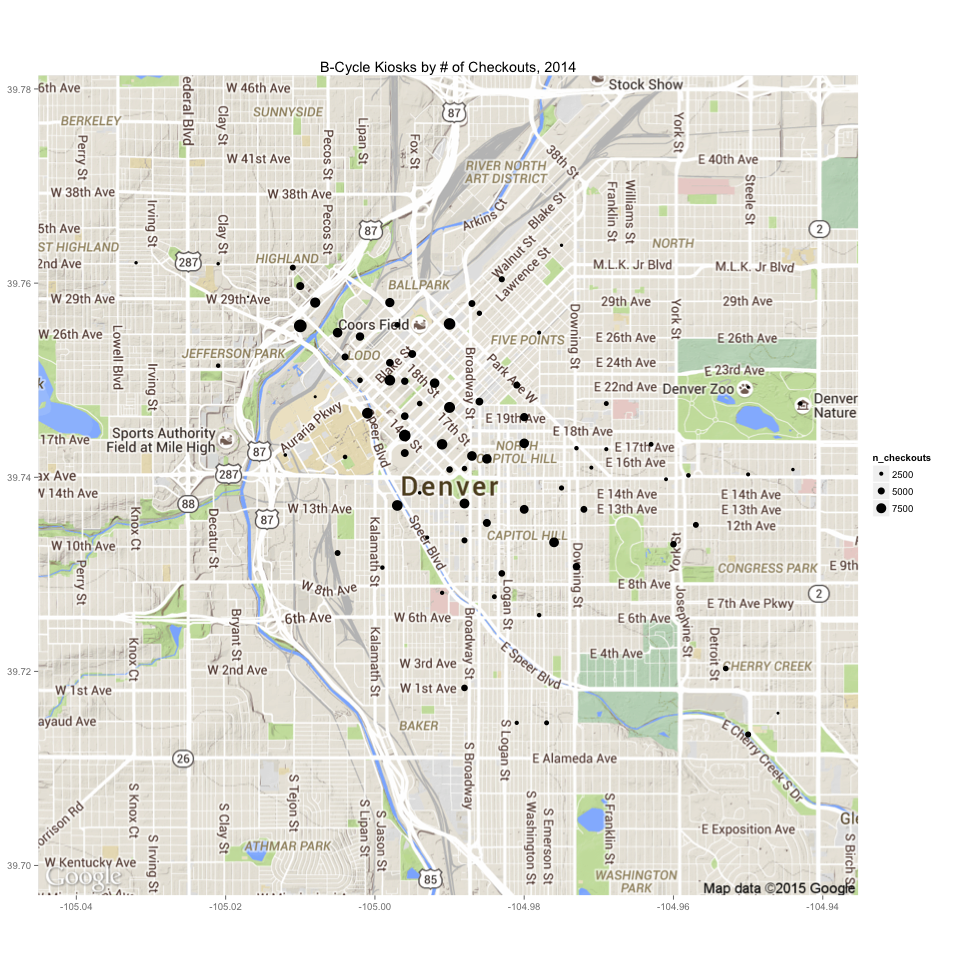 Figure 2: Kiosk locations and number of checkouts in 2014

B-cycle has a number of different membership passes. The following were the top 5 by number of checkouts in 2014.

Ridership by Calendar and Clock Variables

To dive a little deeper into the data, I aggregated the data by taking the total number of bike checkouts for each hour of the year. All checkouts in a given hour were assigned to that specific hour (i.e. a checkout at 6:02 AM and a checkout at 6:56 AM both count as a checkout in the 6 AM hour). 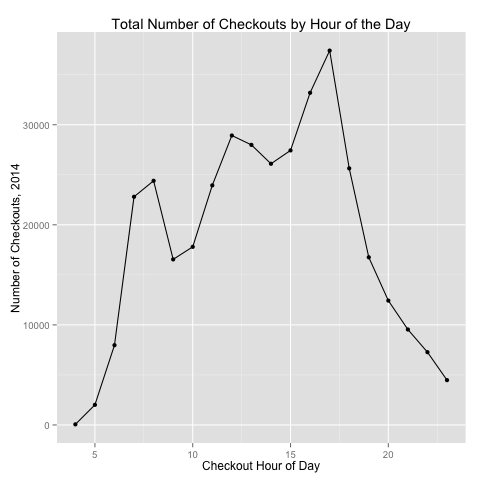 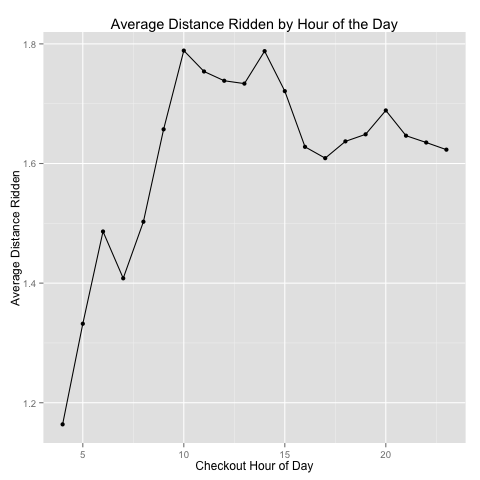 These figures show that most bike checkouts occur during the 4 PM and 5 PM hours, likely for the evening commute; however, people are more likely to ride a longer distance during the middle of the day – this may have more to do with the “tourist factor.”

Ridership by Hour and Weekday

I also looked to see if the above patterns held true each day of the week, or if the patterns were perhaps different on the weekend. Indeed, as Figure 5 below shows, the weekday patterns (days 2-6) are all fairly similar; the weekend patterns show a significantly different shape, with usage peaks occuring between 1 PM and 3 PM. 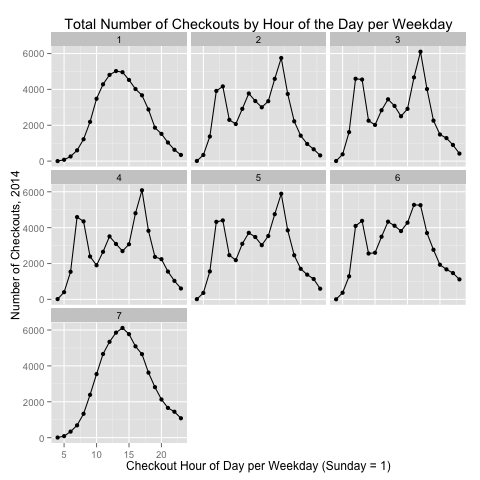 Figure 5: Checkouts by Hour of Day per Weekday 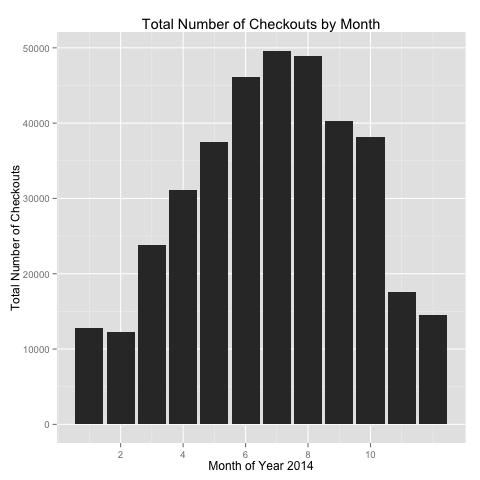 After looking at ridership as it relates to calendar and clock variables, I merged the data with hourly historical weather data. My hypothesis, based on observations of bicycle riding around Denver, is that in addition to ridership being affected by the time of day, ridership is also affected by the weather. We would likely expect more riders on warmer days (the monthly ridership statistics may be a proxy for this).

One variable I plotted is the number of bike checkouts versus the temperature (Figure 7 below). I noted that the relationship between numbers of riders and temperature appeared to follow curve, rather than just a straight line. I fit a loess curve in ggplot to visualize the curve; based on this, in my linear regression in the next section, I used temperature and temperature squared for my linear model fit. 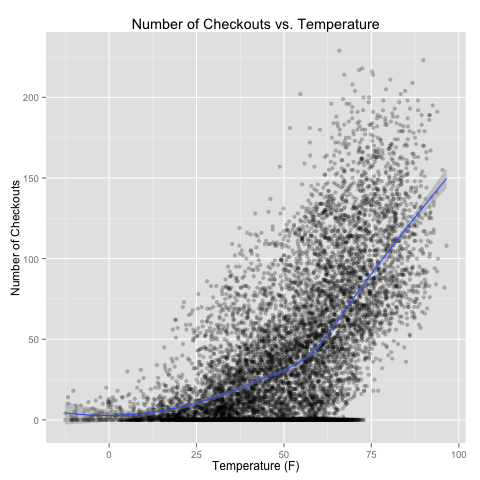 In my linear model, I also considered humidity levels and cloud cover levels.

My final task in this short study was to attempt to create a linear regression model using a number of calendar variables and weather variables.

To create this model, I forced the calendar variables to be “factor” variables. For example, it makes little sense to treat the months as actual integers – the integers denoting the months are stand-ins for the months’ names. Similarly, because peoples’ schedules do not follow a linear trajectory throughout the day, despite the increasing hours (the activity levels are more sinusoidal), it makes more sense to treat hour variables as individual factors. Likewise for weekday factors. I also have holiday factors – either 1 for holiday or 0 for not a holiday.

Using the above inputs, I created a linear model. A summary of the linear fit shows the following output. An interpretation follows in the next section.

I have a few intepretations of the above model:

Based on my short study of 2014 Denver B-cycle trip data, I found that we can create a linear model of trip ridership based on several calendar and clock variables merged with basic weather data. My study focused on total system ridership, on an hourly basis, rather than modeling specific checkout or return kiosks. Most calendar variables are highly significant when predicting ridership, and weather variables such as temperature and amount of cloud cover appear to be as well. Based on R-squared, approximately 73.8% of the variation in hourly ridership can be explained by the simple model.

I have many more ideas of ways that we could study this data, which I did not have time for in this particular project. The following are some of these ideas:

About this Project, Source Code

I originally completed this project in August 2015 as my final project for University of Washington’s Methods for Data Analysis class, course #2 of 3 in the Data Science Certificate program. This blog post has only been slightly modified from my assignment submission. Source code for the analysis, in addition to other project files and data, can be found in my denver_bcycle repo on GitHub.